Draw Your Idea For Me

I've been lucky enough to work with some amazing artists.  I've also worked with people who have a hard time drawing a stick figure.  But when you're brainstorming and problem solving with a team (which is what Limnu is designed for), it turns out that you don't have to be an accomplished sketch artist.  You just have to be willing to pick up a marker and draw in front of someone else.
One of the very talented artists I worked with is a guy named James Buckhouse.  He recently wrote an article called "If you can draw these three shapes, you can draw the Internet", where he demonstrates that with a circle, a triangle, and a rectangle you've got the building blocks to communicate almost any idea in your head... three shapes is, more or less, all you ever need. 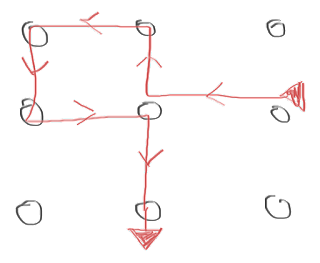 Recently I let a friend borrow my Android tablet. I'd set the tablet up with a visual password: You had to draw a line in a certain way to unlock the tablet. Unfortunately, I forgot to tell him that, and he got home with a tablet he couldn't use. I started writing him a bunch of text explaining how to draw the right shape: Start half way up the east side, go one spot west, turn north... it got out of hand fast. Then I realized – duh! – that I have a tool just for this.  So in a few seconds I drew him a picture in Limnu, he unlocked the tablet, and we both got back to getting stuff done.

It sounds obvious, but it's oddly easy to forget: If you've got something visual to communicate, do it visually!